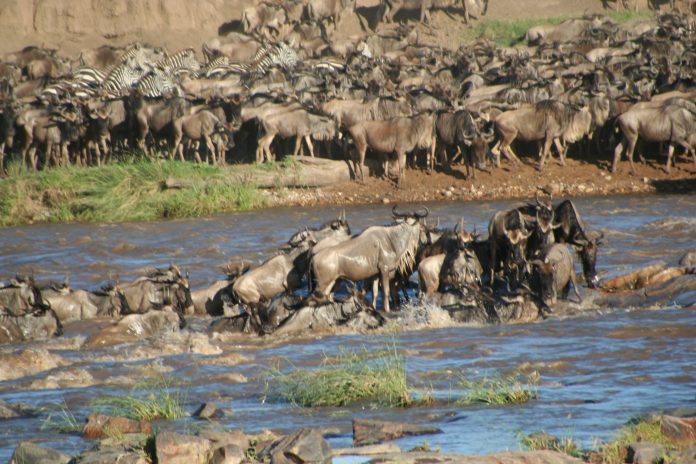 Large herds of East African wildlife have little in common with urban sewage, until their immersion in water. In both cases, that medium enables a metamorphosis; it catalyses the circle of life’s least glamorous and most interesting phase: decomposition.

Consider the spectacular blue wildebeest migration. After crossing the Serengeti plains, grazing 4,500 tonnes of grass each day, roughly 1.2 million of these ungainly creatures halt at the muddy edge of the Mara River, where they work up the courage to cross. It’s a decisive moment, fraught with Darwinian tension. For each wildebeest devoured by a toothy crocodile, fifty more die in mass drownings, their bloated carcasses piling up by the hundreds. Each year some six thousand animals die this way, rotting into the river, releasing a powerful stench.

To the contrary, it is the essence of vitality, as one existence gives rise to the next. The chemical spirit of wildebeest, left behind in 1,100 tonnes of meat and bone, feeds into an explosive new web of biodiversity. Hundreds of different species converge upon each soggy carcass. Beyond the usual suspects–vultures, hyenas, marabou storks–swarms of egg-laying bugs thrive and fresh water fish get half their food from the putrefying flesh. Scavenging reptiles, birds, mammals, insects and fish themselves migrate throughout the basin, transporting nutrients across the savanna as they defecate, or feed other species that are in turn broken down, and so on.

The wildebeests’ life-giving cycles rotate over weeks, months, even years. Researchers, who describe the many intricate and enduring effects to Atlantic magazine, point out how a crystalline river is more anemic and vulnerable than ones like the Mara, clogged with death. “The long pulse of nutrients means that different species can take advantage,” said University of Glasgow’s Grant Hopcraft. “That leads to diversity and diversity leads to resilience.”

Sewage treatment plants lack the drama of charismatic megafauna. But below the surface, the work of “charismatic mini-flora” is more complex, equally fascinating and rapidly changing.

For millennia, humans rightly sought to expel from our homes and workplaces the harmful faecal bacteria, metals and toxins of filthy waters. Doing so protects our health and well-being. But we are finding that industrial treatments to rid civilisation of ‘waste’ water has often come at a cost.

It devours vast amounts of energy. It emits countless tons of greenhouse gases. It deprives nature of food. It makes some rivers “too clean.” It leads us to, quite literally, throw the baby’s microbial life out with the bathwater.

Not all of this is taking place in rich cities. Simple, small-scale processes are emerging across less affluent communities. These mimic other biological cycles, such as the lesser flamingo, which feeds on shrimp, which feed on algae, which feed on flamingo excrement. Talk about a closed-loop system.

Likewise, some rural and peri-urban areas in Africa and Asia are learning to bypass the traditional pipe system of sewerage in favour of modular urine diversion toilets; rather than pay officials for treatment, some are paid for their excrement. Decentralised compost businesses grow flowers for export, or store fuel in local distributed biogas reactors.

As demand grows, water professionals respond, stepping up efforts to discover, share, scale, and replicate solutions. We borrow from and improve upon biological processes, for we know the wildebeest–and species that depend on its death for their rebirth–has been doing this R&D for ages.

In both wild and domesticated waters, ‘waste’ breaks down into food. Food is fuel. Thus waste is reborn in our cells, our imaginations, our quest to surpass nature’s own circular economies–those resilient cycles that never stop evolving.