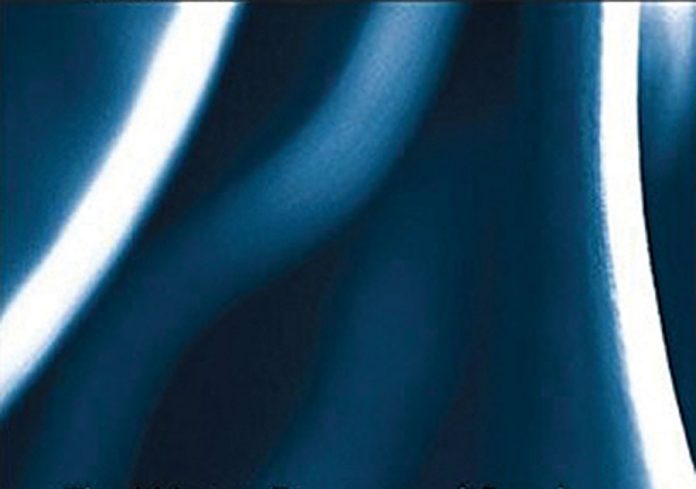 A series of publications suggest the end of the ‘water sector’ is near, to be replaced by a provocative, if nebulous, institutional linkage 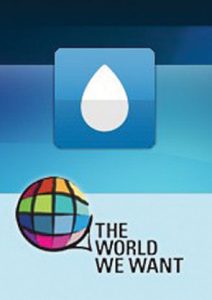 The Post 2015 Water Thematic Consultation Report
[United Nations, 2014]
In the lead-up to the unveiling of the Sustainable Development Goals, professionals from our industry sought to elevate water to its rightful place at the front and centre of global agendas. Yet they were often split over the tactics needed to accomplish this. Given its primacy of interest over other sectors (see graph below), many concluded: “Now recognized as an absolute and central prerequisite to development, water justifies its own explicit standalone goal, with integrated targets and measurable indicators.” Others worried that such narrow specificity might dilute water’s political impact and significance (and funding). Indeed, as teams distilled thousands of responses and debates by stakeholders, “it emerged that linkages exist between several of the consultation themes; but water underpins each and every one.”
These linkages were highlighted in a chapter on “The Water Nexus,” which, “guided by contributions from the International Water Association and IUCN” on energy, food, infrastructure development and climate change, made it “increasingly clear that water cannot be managed in isolation. Trade-offs between these different sectors must be considered before policies are developed or investments made.”
That report was hardly the first major publication to weigh in on the vital nature of “the water nexus”. Nor would it be the last. But it set a pattern. The recipe for nexus publications tends to assemble “experts” in a room, organise essays (ironically) by silo, bind them under a forward by a Very Prominent Wise Man (Dutch and British royalty, or UN Secretary-General Ban Ki-moon), and call on humanity to transform the way they use and value and think about the mutually reinforcing foundations of life. A brief sampling: 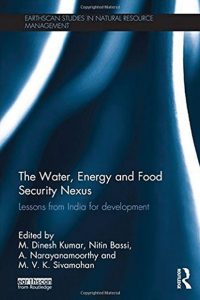 The Water, Energy and Food Security Nexus: Lessons from India for Development
Edited by M. Dinesh Kumar, Nitin Bassi, A. Narayanamoorthy, and M.V.K. Sivamohan,
[246 pages, Routledge, 2014]
Brings the perspective of engineers and economists to the nexus. Unlike those with an urban focus, this gives due consideration to rural water. The rather technocratic approach tends, like others, to downplay the challenges of decision-making, and changing policies, within governing institutions. 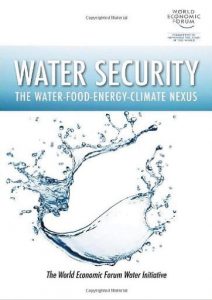 Water Security: The Water-Food-Energy-Climate Nexus
By World Economic Forum Staff, [288 pages, Island Press, 2011]
Among the first to capitalise on the energy and food crises of 2008, this stark, accessible overview broke new ground not only in what it said–“the world is on the brink of the greatest crisis it has ever faced…water security will soon have dire consequences in many parts of the global economic system”–but in who went on the record in saying it. These were not just academics or wild-eyed eco-activists talking about water creating “limits to growth,” but rather the leaders of Dow, Nestle, Coca-Cola, Syngenta, SAB Miller, Pepsi, and other multinational corporations. “The findings are shocking. Perhaps equally stunning are the potential solutions and the recommendations” on “how business and politics need to manage the energy-foodwater- climate axis.” 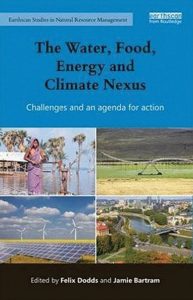 The Water, Food, Energy and Climate Nexus: Challenges and an agenda for action
Edited by Felix Dodds & Jamie Bartram [292 pages, Routledge, 2016]
“It is increasingly clear that there is no place in an interlinked world for isolated solutions aimed at just one sector.” So argues this overview of “both the science behind the nexus and the implications for policies and sustainable development.” Contributions by officials, industry, and scientists weave together the various threads. An exemplary chapter by Gary Lawrence on “The confederacy of experts: the crushing nexus of silos, systems, arrogance, and irrational certainty” tweaks the confidence of gurus who rarely leave the comfort and security of their pinnacle of specialty to engage in debate down in the valley of generalists. 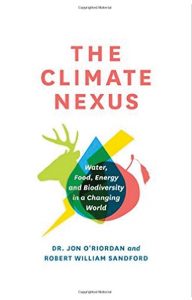 The Climate Nexus: Water, Food, Energy and Biodiversity in a changing world
By Jon O’Riordan, Robert William Sandford, and Deborah Harford
[168 pages, Rocky Mountain Books, 2016]
Once again, we find “secure supplies of water, food and energy are essential to human dignity” and their “vitality is dependent on healthy ecosystems supporting thriving biodiversity. All four elements are inter-related in that actions to govern one will automatically affect the others.” But global demand for the first three worsens life for the fourth. To complicate matters, “increasing pressures from climate disruption” take the form of rapidly changing hydro-climatic conditions. The prescription? “Transformative policy responses” that “encompass economy, equity, social justice, fairness, and the environment.” Having scared readers with these massive challenges, the book “offers a pathway to resolving them.” 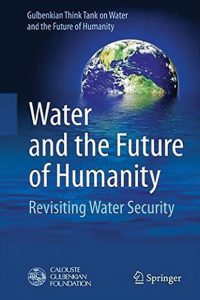 Water and the Future of Humanity: Revisiting Water Security
[241 pages, Springer, 2014 edition]
Lock eleven oft-quoted global water authorities in a room over a two-year span, smash their perspectives together, and what do you get? As expected, a sobering assessment of threats to water (and food and energy) security, made worse by a rapidly warming climate, but also surprisingly optimistic projection “of hope due to technological, economic and institutional advances that are already being implemented by decision-makers in different settings throughout the world.” The nexus has a starring role. Water and cities, water and energy, water and food, water and climate. All we need to do, it seems, is “replicate and scale these success stories.” Frustratingly, one does not find an analysis of why that has not happened. 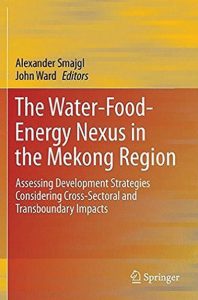 Water Allocation in Rivers under Pressure