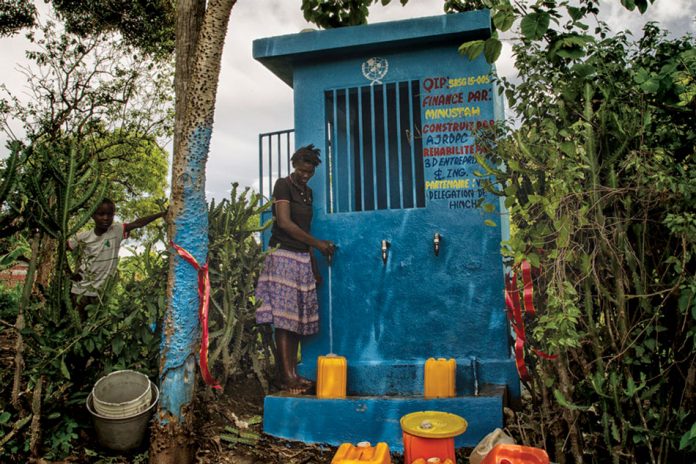 Some 30,000 residents of three localities in Haiti now have access to potable water, thanks to a sanitation campaign launched by the government, supported by the UN, following a cholera epidemic that killed almost 100 people in the community.

The residents of Los Palmas, Guébo and Jacob–three localities in the third communal section of Hinche–were part of an initiative aimed at increasing and improving access to safe drinking water and sanitation facilities in schools but which also focused on supplying water to health centres and homes.

The initiative also involved engaging in the construction of latrines to avoid contamination of water by open defecation, to reduce the spread of waterborne diseases including cholera.

Actions included water source collection and the manufacture and installation of 12 kiosks and two water points.

In July 2014, Ban Ki-moon, Secretary-General of the UN, visited Los Palmas, along with Sandra Honoré, his Special Representative in Haiti and also Head of the UN Stabilisation Mission in Haiti, and Laurent Salvador Lamothe, who was then Prime Minister of Haiti, and expressed sympathy to cholera victims and the victims’ families.

Following exchanges with the population, the officials laid the first stone of a drinking water system for the citizens of Los Palmas and surrounding areas.

At the time of his visit in 2014, the Secretary-General said that the UN “stands ready to support this initiative in more remote areas, where cholera persists […] You can count on me and on the United Nations to do our part of the job.”

At an opening ceremony in June in the town of Jacob, Pierre Ubalijoro, Acting Head of Civil Affairs, who spoke on behalf of Honoré, stressed that the initiative is crucial to reduce the risk of waterborne diseases including cholera, which he underlined is a priority for the UN in Haiti.

“The work in Los Palmas is part of efforts made by the United Nations family in Haiti, various agencies, funds and programmes to support Haiti to fight against cholera and to advance towards Sustainable Development Goal 6, which aims at ensuring universal access to water and sanitation,” he said.

In 2015, there were 326 cases of cholera identified in affected areas, while in 2016 only six cases were identified.