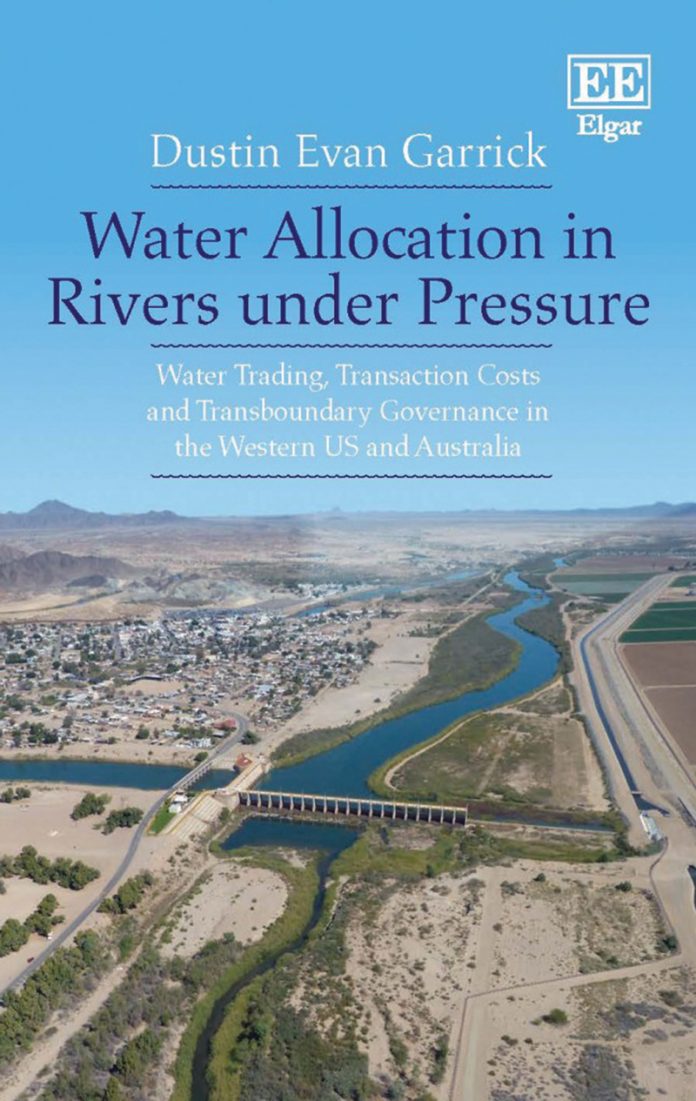 How institutions evolve to replenish rivers

In light of climate change, population growth and escalating water demand, governments must confront the problem of ‘basin closure,’ that political tipping point where human demand exceeds natural supply which forces officials to respond with hard limits and new approaches.

As basins close, water managers must link ecological systems, hydrological cycles, economic values, and political users. Their focal and fundamental challenge links rivers from the Amazon to the Zambezi, and every current flowing in between.

For those seeking solutions to such a universal challenge, this is an important book. The central question Dustin Garrick addresses in Water Allocation in Rivers under Pressure is, as the title suggests, how to divvy up water resources in closed or closing basins, in the most effective way.

Garrick’s answer is not only timely, but notably well written. His approach is to examine how the allocation of water resources has shifted over time in three very different but equally iconic river basins: the Columbia in the American Pacific Northwest, the Colorado in the American Southwest, and the Murray-Darling River in southeastern Australia.

Garrick recognises how politics matter, and moves institutional history to the front burner. He examines how allocation regimes have evolved in each basin, and then frames this cultural past with the objective of better understanding why–despite the significant resources invested in reform–water allocation institutions have often fallen short of delivering sustainable and adaptive responses to water scarcity challenges in the present.

He explains slow and uneven progress by looking at transaction costs and institutional path-dependency, which inhibit adaptive management responses to constantly evolving allocation dilemmas. Garrick’s conclusion shines an overdue light on the institutional sources of friction that stand in the way of water resource management reforms.

Casual observers tend to blame ‘cumbersome central bureaucracies’ and call for the ‘nimble free trade’ of water markets. But Garrick’s real insight is to say that water markets, often touted as a silver bullet for addressing water scarcity in stressed basins, are not self-sustaining.

Instead, they require substantial institutional buttressing, political commitment, and, perhaps most intriguingly, a commitment to continual reform. Water allocation, as Garrick quickly and quite rightly points out, is a fundamentally dynamic process, and the institutions that accomplish it must be capable of relentless adaptation in response to changing circumstances, climates, and demands for water.

These conceptual contributions distinguish Garrick’s book from most others on the topic of allocation, which tend to be more narrowly technical. Above all, he goes beyond identifying the nature of the problem to outline several specific phases and features of water allocation that are of substantial interest and relevance to scholars and practitioners concerned with water scarcity.

Three distinct phases shape the development of water markets in a sequence–emergence, strengthening, and adjustment–each with its own distinct challenges and pathologies. The recognition that water market evolution is sequential matters immensely, for it suggests both that incremental development is inevitable, and that common lessons can be learned from attempts to establish markets for water across countries.

The promise of generalisability is one of the book’s greatest strengths, but it is also a weakness. Drawing generalisable conclusions from comparative study requires careful selection of case studies, and Garrick’s approach in this regard, though understandable and defensible, constrains the applicability of his conclusions across countries. Put bluntly, his three cases all come from developed, Anglophone, common-law countries.

While that emphasis on institutional political economy is compelling when applied to this limited set of cases, it would likely prove less useful in the case of closed and closing basins in the developing world. In most such basins, institutional capacity is extremely constrained, and social cleavages along ethnic, linguistic, or socio-economic lines exert a more powerful influence on water allocation than Garrick’s framework really accounts for.

But ultimately, these limitations pale in comparison to the value of the marker that Garrick lays down. Water Allocation in Rivers under Pressure is one of the most robust, sophisticated, and comprehensive accounts of water allocation, and is sure to become a new standard on the topic, against which future contributions should be measured. Scholars, practitioners, and the interested public concerned with the problem of allocating water under scarcity would be greatly remiss in not reading Garrick’s account for themselves.

Dustin Garrick recommends these four perspectives to water professionals seeking to enrich their understanding of how best to approach the management of closed river basins.

Embracing Watershed Politics
By Edella Schlager and William Blomquist University of Colorado Press: 2008
Policy and institutional scholars Schlager and Blomquist explore the role of politics and decision-making in watershed governance, highlighting how transaction costs–and the politics that shape them–have been a key impediment to basin governance in the Columbia River.

Shopping for Water: How the Market Can Mitigate Water Shortages in the American West
By Peter Culp, Robert Glennon & Gary Libecap. 2014
In a policy report for the Hamilton Project and Stanford Woods Institute, the authors discuss the case for water markets in the western US and note the need for key reforms at all levels, including federal leadership to promote interstate cooperation.

Groundwater futures in the spotlight