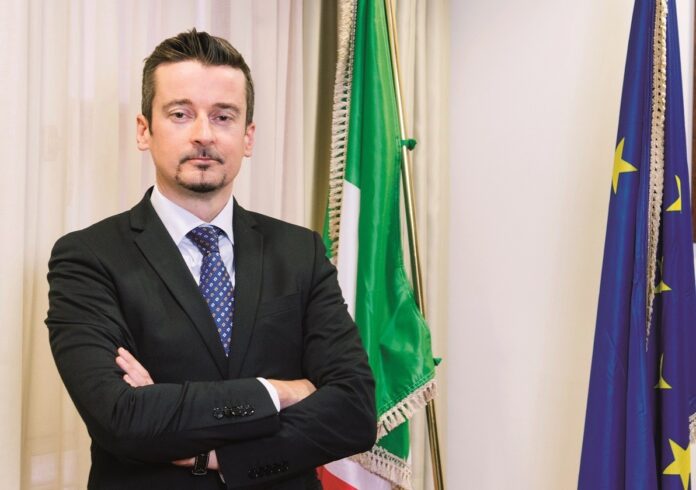 Professor Andrea Guerrini, Board Member of the Italian regulator ARERA and President of the Association of European Water Regulators (WAREG), provides a regulatory perspective on the challenges of the COVID-19 pandemic. By Carolina Latorre.

Professor Andrea Guerrini knows the water sector well. With a career that has included regulator, academic, and president of a public operator, he has practised in, researched, and taught about the sector. Since August 2018, he has led the regulation of water services in Italy as Commissioner of the Italian Regulatory Authority for Energy, Networks and Environment (ARERA). Until a few months ago, Guerrini was drafting the tariff methodology for drinking water services for the city of Bolzano. He was also co-founding the Water Management and Technology Research Centre of the University of Verona. The past few months have seen that change.

“The current emergency is changing our lives,” says Professor Guerrini, speaking by video call from his home in Tuscany, with ARERA’s headquarters in Milan closed following the severe impact of COVID-19 pandemic in Italy.

His career means he sees the perspective of the European private sector and public entities such as independent regulators. “We cannot know how this emergency will change our future ways of life, but we know that something has already changed to face the problems from the COVID-19 pandemic,” he says.

When Italian authorities reported the first case of the virus in the region of Lombardy (northern Italy), the economic engine of the country, it was clear the crisis had already become global. Milan, its capital, became a benchmark for the world’s great cities.

When he took up the ARERA role, Guerrini also became president of WAREG, the Association of European Water Regulators, giving him an overview of what the crisis has been like in Europe. “The current pandemic has been the first to require regulators to introduce specific emergency measures; it is unlikely that any regulatory agency could have been prepared to cope with it.”

For ARERA, the first reaction came not long after the Italian government declared a national emergency. Guerrini had to divert from business as usual, and the regulatory authority partially derogated some rules on commercial quality of drinking water and sanitation services. The first new rule targeted customer protection against the financial crisis.

The flexibility and adaptability demonstrated by the response was, says Guerrini, the consequence of “ARERA’s continuous interaction with consumers and utilities, and of its high capability to adapt economic regulation to sudden changes in the external context”. These are “two of the main determinants of effectiveness in regulatory measures among global emergencies such as the current one”, he stresses.

Balancing the concerns and the interest of customers and utilities, however, could not have been easy. Remote working has changed lives. Lockdown measures worldwide have transformed utility operations, decreasing industrial and commercial consumption, and increasing costs related to emergency protocols and automation to protect the workforce. According to Bluefield1, in the US alone, public wastewater utilities asked for US$12.5bn in economic relief to offset revenue lost. In late April, the European Bank for Reconstruction and Development created a Vital Infrastructure Support Programme2 to help utilities and protect the continuity of services in 38 countries, such as Greece with its loss of tourism-related revenues.

The pressure from utilities to relax measures has, therefore, been high. “Companies asked for derogations of rules on commercial quality and measurement immediately after the beginning of the emergency,” says Guerrini. This was followed by requests of “financial support to relaunch investments and, in the short term, to cover working capital needs”. Guerrini adds: “Some companies are already asking for improvement of cost coverage rules, by demanding application of an extra risk premium as a return on investments, and by asking to cover a shorter asset depreciation period and higher standard costs for arrears through the tariff.” The role of the regulator has been to balance these requests with the fact that customers are not willing or able to bear higher tariffs.

Balancing these interests is a hard task for any regulatory agency during normal times, but especially in the current circumstances. Matching customer protection within the limit of financial stress on utilities “requires continuous monitoring of economic key performance indicators, including the rate of collected revenues and the volume of water effectively delivered”, says Guerrini. Just as for utilities in the US and Greece, he explains that there has been a decrease in the volume of water sold to and consumed by non-domestic customers in Italy, which “may generate an estimated shortfall in annual revenues of 5% to 15%”.

He continues: “Companies may have to face extra costs, to purchase safety devices, disinfectants and IT solutions aimed at improving smart working approaches. Overall revenue inflows may decrease even further because of lengthier collecting times as a result of payments by instalments and higher rates of payment default, which is likely to increase arrears costs in companies’ balance sheets.”

Any decision on what support to provide to utilities is affected by the fact that such measures will have a wider effect. “As water services are typically capital intensive, investments have a strong economic impact on the area served by a utility company,” explains Guerrini. “Several local and national firms [such as engineering companies, construction firms, plumbers, IT companies] work to realise them. A financial guarantee of one euro through public money could generate more than 10 euros in economic value.”

Furthermore, their impact will last beyond the current health crisis and, hopefully, reinforce resilience for both customers and the sector, ready to face the next crisis – the economic one.

For these reasons, Guerrini explains that ARERA has implemented measures “to promote an effective stimulus to water companies for their economic recovery, such as, for instance, a proposal to the Italian government to activate specific funds and financial guarantees.” Additionally, he says, “ARERA opened a special account endowed with an amount of up to €1bn, mainly collected through parafiscal and other tariff items that could support financing the working capital needs generated by the measures for customer protection.”

On Europe more widely, Guerrini explains that WAREG has been monitoring the general trends among 31 water regulatory agencies, including national and regional authorities, since the beginning of the crisis. Guerrini observes that the first responses, around March this year, were “to ensure continuity of water supply and good quality of drinking water for all consumers”, with a general “shift towards more flexible rules for regulated companies, combined with strengthened consumer protection”.

As in Italy, “most regulators have adopted specific measures to protect vulnerable customers, such as the possibility to defer the payment of water bills or the suspension of cut-off procedures against payment defaulters during the time of the crisis,” says Guerrini. To reinforce this, he explains that “most regulators in Europe have decided to postpone the deadlines for the transmission of economic, financial and water service quality data, hence ‘freezing’ temporarily, until the end of the COVID-19 crisis, any possible increase in the level of tariffs”.

Guerrini says that it is still too soon to tell how resilient the sector will be in the coming months as a result of current regulatory measures, or how deep the coming economic crisis will be. There is too much uncertainty, and the health crisis is ongoing.

He and WAREG will continue monitoring the effects of regulatory measures for regulated water businesses. They will be looking at the economic impacts of the COVID-19 crisis, case by case, and “in particular, whether some specific tariff rules are going to be adapted by any European regulator, to accommodate possible extra costs and revenue losses of companies in their own country”.