In 1854, a London physician named John Snow ended a severe cholera epidemic. He didn’t invent a vaccine. He traced the outbreak to one public pump on Broad Street, then shut it off.

That historic breakthrough has led water and sanitation professionals over the last century and a half to embark on a global effort to eradicate microbial and chemical contamination in all urban and rural supplies. It’s a worthy mission. But it’s not the right lesson.

The lesson is that we all too often are blind to the real vectors of infectious disease. Consider today’s (re-)emerging pandemics: avian flu, dengue, West Nile, Chikungunya, yellow fever, and now Zika. What do these have in common? If you answered “terrifying infectious diseases caused by organisms for which animals are the original reservoir host,” you’re close.

A complete answer is that these zoonotic diseases trace back, for better or for worse, to water: not water as a medium, water as an ecological requirement.

This may be hard to grasp for those with an engineering background. We find it hard to relate our work to the uncertainties of ecological systems. A dam, pipe, sewer, pump or canal can be trusted to obey the laws of physics. Even the health risks of microbial contaminants can be tabulated based on concentration and exposure. The spread of insect-borne viruses is far less predictable.

So we compartmentalise our mission, and narrow our vision. We deploy hard infrastructure and chemicals to reduce cholera, worms, typhoid fever, giardiasis, cryptosporidiosis, or amoebiasis. Yet in doing so we tend to disregard vectors behind zoonotic diseases and other water-related vector-borne diseases such as malaria, filariasis and schistosomiasis as largely outside our realm of expertise, and thus, our responsibility.

This is a mistake. Such myopia not only may hinder global efforts to roll back emerging public health crises; it could make outbreaks worse. In biology, adaptation to pressures and change is a constant feature, and before you know it a water-borne pathogen has mutated and become more virulent, more resistant or has otherwise changed its characteristics.

It’s high time water professionals stepped up to such lethal challenges. The emergence of Zika infections–only the latest zoonotic disease, but not the last–shows us both why, and how.

At the core of Zika–and other viral infections that preceded and will follow it–are the mosquito vectors pivotal to its deadly transmission: Aedes aegypti and Aedes albopictus. Get to know these carrier species. For how you locally manage water and sanitation could make or break their global ability to transmit disease.

Aedes mosquitoes require critical habitats, all related to aquatic ecology. Aedes needs standing fresh water for reproduction, water to lay eggs in, water for larvae to develop, and water for their pupal transformation into an adult mosquito. Specifically, Aedes breed in small water containers in and around the house; the diseases they transmit are linked to human settlements.

The supply, type, level, and reliability of drinking water can determine Aedes breeding. In many urban parts of low and middleincome countries, erratic service leads people to store water at home.

Anatomy of an outbreak

The emergence of Zika shows all the classic patterns of a water-related disease:
• In late 2015 doctors in Latin America report a rise in a strange and horrific neurological disorder ravaging patients.
• Three to five percent of those afflicted by Guillain-Barré Syndrome (GBS) die from complications such as paralysis of the muscles that control breathing, from blood infection, lung clots or cardiac arrest.
• Another manifestation for which an increased frequency is observed is microcephaly, a neonatal malformation of a baby’s head size.
• Epidemiological, clinical and laboratory research establishes a link to an obscure Central African virus, which until then merely caused flu-like symptoms.
• In February 2016, the World Health Organisation declares an international public health emergency, which triggers a formal process of intensified review and surveillance under WHO’s International Health Regulations.
• A month later, Margaret Chan, Director General of WHO, confirms an increased incidence of GBS in 12 countries and that the virus circulates in at least 38.
• Looking ahead, many fear that the non-immune human reservoir scheduled to converge in Brazil for the 2016 Olympic Games just long enough to be infected, will fly home to propagate Zika around the world (the good news is that the Olympics take place during the cool season in Brazil when transmission by mosquitoes is at its lowest level)
Missing from the hype and headlines about clinical effects is the role and relevance to those working on the provision of drinking water and sanitation services.

In the tropics, with a distinct rainy season, many harvest rainwater. By most definitions, household water–stored in small containers or in the large 200 litre vessels of Southeast Asia–may be “clean” and “healthy.” Unfortunately, it also carries the risk of spreading Aedes.

In the absence of drugs or vaccines, the health sector response has typically focused on “vector control.” Operators of drinking water supply and sanitation services can contribute significantly to these efforts in seven ways.

Next, collaborate with health authorities on biological control in water storage programmes. In Vietnam, the use of water fleas (copepods) that eat mosquito larvae is an effective vector control; elsewhere, larvae-eating fish have proven economic results. The main drawbacks of biological approaches are sustainability and social acceptance.

Third, we have to improve drinking water service levels to ensure uninterrupted supply, since achieving this will render household water storage obsolete. Affordability is another key parameter, as otherwise metered water supplies may lead to paying for drinking water while still storing well water for other domestic uses. Pro-poor water policies should be able to internalise the social costs of lost health and productivity. 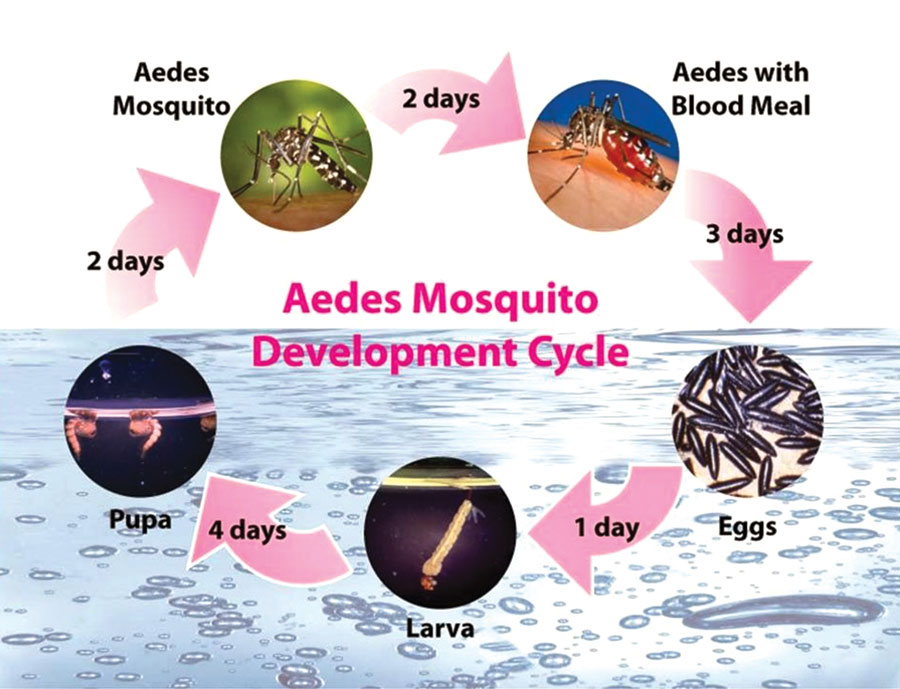 Fourth, take a systemic approach to reduce Aedes vectors through proper wastewater management. Recent research found that the collection of bulky waste from wastewater as a first step in the treatment process can encourage mosquito breeding if that water-holding waste is not properly disposed of.

Fifth, know your enemy. Indoor sprays and impregnated bed nets won’t stop Aedes mosquitoes, which in contrast to their nocturnal malariacarrying anopheline cousins bite and take their blood meals during daytime, and often outside of the house. True, the use of ultra-low volume (ULV) fogging equipment can help reduce Aedes populations. But the most effective control of mosquito vectors relies heavily on killing larvae. The application of pesticides to drinking water containers is a sensitive political issue, of course. New WHO guidelines address at length the vital trade-offs between individual risks of toxicity from larvicides, and the social burden of vector-borne diseases.

WHO evaluated seven chemical compounds and one bacterial larvicide as suitable for Aedes control, excluded two, and recommends the others since concentrations needed to kill mosquito larvae exposure will stay well below ADI values.

Sixth, keep calm. The best defence against general fear, media hype and public hysteria is knowledge. Despite reckless reporting, there is no scientific evidence that the neurological complications have anything to do with pesticide application in drinking water; conversely, there is no value in suggestions that DDT, a residual pesticide whose elimination is sought under the Stockholm Convention on Persistent Organic Pollutants, should be reinstated in the fight against Zika.

The supply, type, level, and reliability of drinking water can determine Aedes breeding. In many urban parts of low and middle-income countries, erratic service leads people to store water at home

Finally, we need to collaborate with health authorities to integrate water provision with vector control. Crossconsult with members of the American Mosquito Control Association, which promotes research on the option of using Wolbachia bacteria to block the survival of viruses in the mosquito vector. Others are testing genetically manipulated mosquitoes that are refractory to virus infection.

The aim of vector control is not victory. It is to hold mosquitoes below a threshold that can slow or halt transmission. The risk will remain, and resurface. Our struggle to align water and health resources against the shared enemy of emerging infectious diseases can never be interrupted.

Of course, eternal vigilance is something all water professionals are good at. We’ve had practice.

Zika pushes us, as modern John Snows, to see water infrastructure through a new lens of lethal water-associated health risks. Yet for all our advances, the current challenge is harder than that in 1854. Today’s emerging transmission models are more diverse, dispersed, and dynamic.

Diverse: Among the vector-borne diseases, virus infections are only part of the story. Malaria can be traced to the ecology of the local vector Anopheles stephensi, breeding in rooftop water tanks on the South Asian Sub-continent. Open sewers host Culex mosquitoes, which prefer organically polluted water for breeding and which transmit filariasis and West-Nile virus. Poor access to drinking water and sanitation sustains the complex life cycle of schistosomiasis, a parasitic blood fluke, in sub-Saharan Africa.

Dispersed: Even after taking the seven diligent steps above, the battle is not won–a significant source of vectors can be eliminated, but there are other sources. Aedes breed in roof gutters, flower vases at cemeteries and discarded tyres holding standing water.

Dynamic: Biological creaturesv adapt quickly, building resistance to drugs or pesticides, and filling new ecological niches as they arise. Improved service provision is no more a silver bullet than exclusive reliance on pesticides.