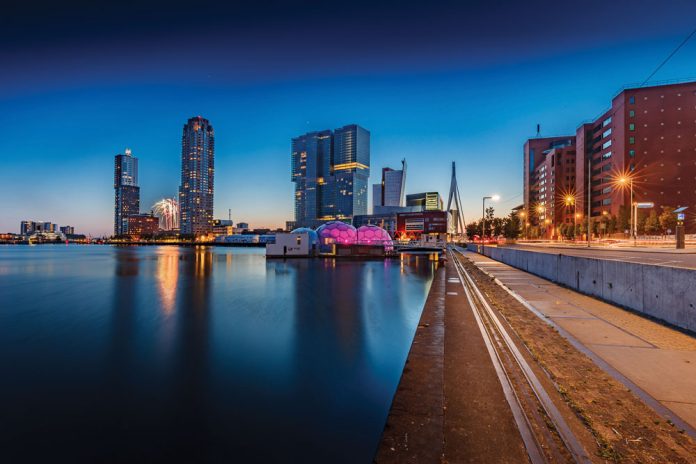 The Dutch port city, Rotterdam, has been ranked the top city for water sustainability, according to the inaugural Sustainable Cities Water Index from engineering and consulting company, Arcadis. Two northern European cities took second and third place–Copenhagen and Amsterdam.

Conducted by Arcadis, in partnership with the Centre for Economics and Business Research, the index explores the three aspects that make up robust (resiliency), effective (efficiency) and healthy (quality) waterscapes to develop an indicative ranking of 50 leading cities.

“Great cities are defined and illuminated by the water that surrounds them or flows through them, and they will continue to be over the coming decades,” said John Batten, Arcadis Global Director of Cities and Water.

“This report highlights the areas of opportunity for cities, to inform decision-making around how they use and manage water, hopefully making them more sustainable economically, environmentally and for the benefit of their people.”

The report finds that most cities need greater investment when it comes to their ability to withstand natural disasters and drinking water shortages, with climate adaptation and resiliency being the most pressing issue for future city leaders.

Meanwhile, the area in which cities tend to perform best is water quality. Despite some locations having areas of challenge protecting their citizens there is little variation between most of the cities in the top half of the index.

The index found a lack of urban green space impacts the resiliency of many cities in the Middle East and Asia and that US cities are among the most susceptible in the developed world to higher flood risks due to natural disasters. It was also noted that world cities like New York, London and Hong Kong that have a greater water vulnerability were not featured in the overall top ten.

City of Trenton sets out plan to improve water quality