Many cities are working towards resilience to better cope with shocks such as those caused by climate change. Marc Velasco, Beniamino Russo, Montse Martínez, Angel Villanueva and David Pacheco outline the RESCCUE project’s progress in Barcelona, Lisbon and Bristol and its aim of creating a tool for other cities.

We already live in a world of cities, and that trend is set to continue. Today, more than half of the world’s population lives in urban areas, and this proportion is expected to increase to 66% by 2050. Cities are complex, multidimensional systems. While they are becoming smarter and more intelligent, they can still be very vulnerable and fragile, with services failing when different kinds of impacts occur.

Climate change is adding pressures and uncertainties for society, the economy, and the environment. In urban areas, climate change may affect basic services, such as water or energy supply. So, the capacity of cities to function continuously is crucial. As the United Nations has stated, managing urban areas has become one of the critical development challenges of the 21st century.

Urban resilience refers to the ability of human settlements to withstand and to recover quickly from any plausible hazards. It refers to reducing risks and damage, such as the loss of lives and assets, from disasters and to the ability to quickly bounce back to a stable state. While typical risk reduction measures tend to focus on a specific hazard, resilience adopts a multiple hazards approach, considering all types of threat.

In this context, the RESCCUE project (RESilience to cope with Climate Change in Urban arEas, www.resccue.eu) was born in May 2016. It is Europe’s first large-scale innovation and urban resilience project, aimed at improving the capability of cities to anticipate, prepare for, respond to, and recover from significant multihazard threats, with minimum damage.

The RESCCUE approach has turned a new page by leaving sectoral approaches behind, instead considering cities as networks of interdependent systems. The four-year project goes beyond the conventional analysis of the impacts of climate change on single critical infrastructures, such as energy, water or transportation. RESCCUE’s perspective is a holistic one, which focuses on interconnections rather than on separate city units of the urban infrastructure networks.

A multisectoral approach – a key advantage

The objective of RESCCUE is to produce a set of models and tools to analyse urban resilience based on a multisectoral approach, to overcome current difficulties related to a lack of information integration of the different urban services. To interconnect sectoral models, the project takes advantage of the existing HAZUR tool and methodology (see item below) as the basis of further software developments able to perform the assessment, management and planning of urban resilience in an integrated way.

Although urban resilience focuses on improving capacity with respect to all kinds of threats, RESCCUE specifically focuses on climate change related impacts, because this has become a critical issue to which cities must adapt. However, the approach could be used in relation to other kinds of events.

The three cities included as pilot sites (Barcelona, Lisbon and Bristol) are the validation platforms of the improved tool, where integrated analyses of urban resilience are being performed throughout the project.

These three research sites have been selected because of their strong engagement with urban resilience, as demonstrated by their selection and participation in the 100 Resilient Cities programme founded by The Rockefeller Foundation. This award has allowed the creation of specific resilience offices, with the aim of creating strong synergies among city actors. All three research sites had already identified water related risks as crucial in their hazard analysis.

All three have also experienced the impacts of climate related events where there are subsequent effects for different city services – so-called cascade effects. For example, a burst pipe in Barcelona in 2016 led to serious traffic disruption and affected water supply to a main hospital, meaning the emergency room could not function for a few hours. Likewise, drought in 2007-08 meant hydroelectric power was at a minimum, causing power blackouts during the peak summer tourist season. Meanwhile, in Lisbon, flooding has affected electricity substations, including one in Praça da Figueira (Fig Square) in the city centre.

RESCCUE aims to improve urban resilience through a set of models and software tools that assess climate change impacts in strategic urban sectors, such as water, transport, energy supply and solid waste. It then interconnects them to assess urban resilience for the current state and a wide range of potential future scenarios.

In this framework, the detailed knowledge of the behaviour of our urban systems during extreme climate events represents the initial basic piece of the whole process of the city resilience assessment. The use of detailed models and software tools is essential for analysing the behaviour and the response of strategic services and critical infrastructures with respect to specific pressures and drivers related to climate change. 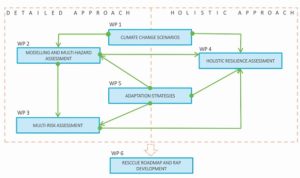 Once the detailed knowledge of each urban service has been acquired, the interdependencies between them and the cascade effects because of failures or extreme climate events are being studied using two approaches, one detailed and one holistic.

The analysis of certain impact events can then be achieved via the use of loosely coupled models and tools. This provides the analysis of hazards and risks produced by complex interactions and cascade effects involving different urban sectors.

In the holistic approach, the resilience assessment tool (HAZUR) is used to analyse the relations and the cascading effects among the different urban services.

Since not all sectoral models are studied in detail and coupled with others in the detailed approach, the whole spectrum of interdependencies and cascading effects is covered by the holistic approach in less detail.

The combination of both approaches allows the functioning of the city as a whole to be understood, while focusing in on some very detailed impacts that are crucial to understanding how several city services affect each other. By having this detailed holistic approach, RESCCUE is generating several kinds of results.

Towards replicable methodologies and tools

During the first half of the project, a lot of interesting results have already been produced. The climate change future scenarios, including extreme events, have been created for the three research sites. All the sectoral models have already been set up and are ready to start the simulations of the current and future scenarios. These will be used to assess the impacts with the models already developed.

An initial resilience assessment with HAZUR has also been made, which helped identify improvements of the tool currently under development. In parallel, a database and methodology for the selection and prioritisation of adaptation strategies has been developed, and it is ready to use for the preparation of the local adaptation strategies. Finally, a resilience assessment framework including all the previous results has been prepared as a step towards the creation of Resilience Action Plans (RAP).

The resilience roadmap for the cities, in the form of a RAP, is one of the key results of the project. Produced at the very end, each will present the strategic lines on which the city must focus, considering also the concrete measures that will be applied to solve specific problems.

These results not only aim at providing an overview of the resilience building in Barcelona, Bristol and Lisbon, but are intended to help many other cities around the world build their capacity to adapt to current and future shocks and stresses. Replicability of results is one of the key concerns of RESCCUE, and this is precisely why this project will prepare a set of guidelines to help other cities.

RESCCUE is expected to deliver three key benefits for cities around the world:

It is also worth highlighting the breadth of the team behind RESCCUE. This project brings together a whole range of experts, representing the main players involved in building urban resilience. RESCCUE, which is led by Aquatec – SUEZ Advanced Solutions, brings together UN agency UN-Habitat, Bristol, Barcelona and Lisbon city councils, utilities such as Endesa, EDP, Aguas do Tejo Atlantico and Wessex Water, four research centres (Cetaqua, FIC, LNEC and IREC), the University of Exeter, the Ecole des Ingenieurs de la Ville de Paris, and SMEs such as Opticits, Hidra and UrbanDNA. Each of the 18 RESCCUE partners brings to the project their expertise, with the aim of making our cities a safer place to live.

Developed by Opticits, HAZUR started from the collaboration of IQS (Universitat Ramon Llull) and the city of Barcelona. It is inspired by several international research works, especially the publications from the École des Ingénieurs de la Ville de Paris, and industrial safety assessment systems such as the HAZOP methodology.

HAZUR can be considered as a realistic approach because it considers all types of services, infrastructures, networks, actors, dependencies, hazards and impacts. Its operational understanding of urban resilience relies on ensuring the continuity of critical services, taking into account that the urban metabolism and service supply can only be managed in an integrated way.

The tool is complemented by the HAZUR methodology. This integrates the results of collaborative workshops, specific studies, data management tools, simulations, predictive models and other tools in an innovative way.

HAZUR Assessment, including both the methodology and the web-based tool, is already a replicable solution that can be implemented in every city. So, the assessment does not aim to use a huge quantity of data, even if, in further stages of the resilience management, it will be necessary for simulation purposes.

On the other hand, HAZUR Manager combines the assessment information with real-time information and enables the simulation of risk situations at city level. It also equips the cities and experts with tools for service network monitoring, risk management and stakeholder coordination.