The Source
Brought to you by PSIPW 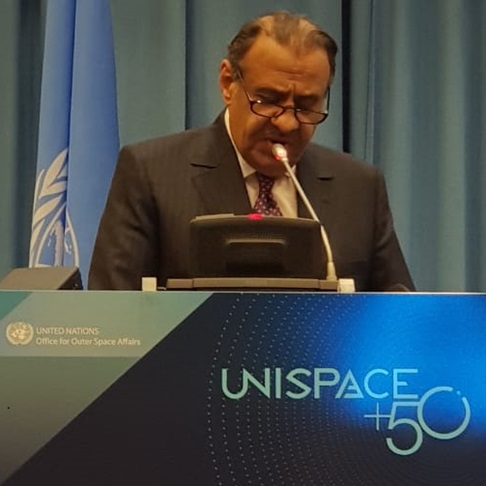 On 20 June 2018, HRH Prince Khaled Bin Sultan announced the winners for the 8th Award of the Prince Sultan Bin Abdulaziz International Prize for Water (PSIPW) at the opening session of UNISPACE+50 in Vienna, Austria.

PSIPW is a leading, global scientific award focusing on cutting-edge innovation in water research. It gives recognition to scientists, researchers and inventors around the world for pioneering work that addresses the problem of water scarcity in creative and effective ways.

To this end, PSIPW offer a suite of five prizes every two years, covering the entire water research landscape.

The Awards ceremony for the 8th Award will be held at the United Nations Headquarters in New York, NY later in the year.

Nominations are currently open for the 8th Award (2018). Nominations can be made online for all five prizes directly through the PSIPW website: www.psipw.org.

Winners for the Eighth Award (2018)
unispace a abdulmalekAfter an initial address by PSIPW Chairman HRH Prince Khaled Bin Sultan Bin Abduaziz, the General Secretary of PSIPW, Dr Abdulmalek A. Al Alshaikh, took the podium and introduced the prizewinners and their works in detail.

Leading international scientists with a diversity of backgrounds — including physics, chemistry and engineering, as well as hydrology — won the five prizes for a wide variety of relevant, groundbreaking solutions that promise to help provide needed drinking water to the world’s people.

The Creativity Prize, which is awarded to water-related interdisciplinary work, was shared by two winning teams:

Dr. Geim and Dr. Nair have developed membranes based on graphene oxide laminates which act as atomic-scale sieves allowing water to pass through while blocking salts and other molecules, a mechanism completely different from that of polymer-based membranes. This promises to enable energy-efficient and high-volume water filtration.

The team achieved this through a simple and scalable self-assembly process that provides stable, angstrom-scale slits at the precise size needed for desalination.

Dr. Blöschl and Dr. Sivapalan have launched a ground-breaking new paradigm for water management studies in the emergent Anthropocene. Named Sociohydrology, this is a new validated approach for studying the dynamic interactions and bi-directional feedbacks between water systems and people. It allows predictions on a scale of many decades to be made in a changing environment by considering the effects of societal actions on hydrology and the effects of hydrological phenomena on societal development. Through their joint efforts, Drs Blöschl and Sivapalan have demonstrated the power of this approach for the prediction of long-term human-flood dynamics. Their work is increasingly important for addressing many vexing water management challenges in the face of population growth and climate change.

This work was built on a solid foundation of prior research that the team undertook on predictions in ungauged basins (PUB). Under PUB, the team developed a novel, universally applicable seven-step method for flood predictions in ungauged basins by developing a mechanistic, physically-based understanding of the incidence of flooding, considering long-term effects like soil moisture variations modulated by precipitation, evaporation and snow melt. They drew up a similarity framework for transferring flood information from gauged to ungauged basins, based on similarity of climate, catchment, and hydrological features. They then compiled data from over 20,000 catchments from around the world to provide the first-ever global assessment of flood prediction performance across distinct climate and landscape gradients.

The winners of the four Specialised Prizes were as follows:

Dr. Brutsaert’s work develops, demonstrates, and validates a new theory that can generate unprecedented estimates of evaporation from the natural landscape, with successful applications in numerous locations. Evaporation is one of the most complex of all hydrologic processes, and its accurate estimation is a continuous challenge for hydrologists. His method, using the nonlinear complementary principle, can be implemented with standard weather data without the need for less common and often complicated measurements. He has demonstrated that his method produces accurate results and can be applied over large-scale areas in various types of terrain.

Dr. van Genuchten’s work focuses on the development and application of key theoretical and software tools that describe water flow and contaminant transport in soil and groundwater systems and, in doing so, help to define modern hydrogeology. Software tools include RETC, CXTFIT, STANMOD and especially the HYDRUS codes. The HYDRUS family of codes are now the industry standard for modelling variably-saturated flow and solute transport problems of all types.

He also developed the van Genuchten functions, which are the standard for quantitative descriptions of the hydraulic properties of unsaturated porous media, including hydraulic conductivity. In addition, he developed the concept of mobile and immobile fluids to describe flow and transport processes in structured soils and fractured rock. Taken together, this work shows him to be one of the most influential vadose zone hydrologists in the world today.

Dr. Yaghi and Dr. Wang have invented a device using an innovative porous metal-organic framework (MOF) developed by Dr Yaghi that captures water from the atmosphere using natural sunlight. The device, which was constructed according to Dr. Yaghi’s vision with the assistance of a team at MIT led by Dr. Wang, is capable of harvesting 2.8 liters of water per kilogram of MOF daily at relative humidity levels as low as 20%, operating passively without any power input, aside from ambient sunlight at a flux of less than 1 sun (1 kilowatt per square meter). The ease with which MOFs can be designed, made, and modified by Yaghi bodes well for their commercialization and widespread use for water harvesting.

Dr. Hall and Dr. Borgomeo have developed and applied a new risk-based framework to assess water security and plan water supply infrastructure in times of climate change. Their innovations include a simulation-based method for analysing the risk to public water supplies under non-stationary climate conditions, a new non-parametric technique for generating synthetic streamflow sequences for water resources systems assessments, a new method for simulating the impact of unprecedented droughts on public water supplies, and a process for identifying water security investments that meet an acceptable level of water-related risk. Their methods assist water managers in planning investments and policies to cope with the risks confronting their water systems. This has made them one of the most influential groups providing engineering and scientific advice for water resources planning and adaptation to climate risks in the UK and globally.