The Source
Brought to you by NCWSC 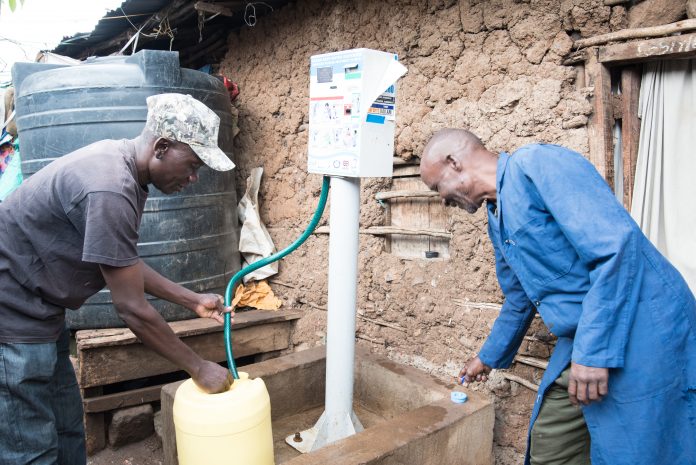 Kenya’s capital city, Nairobi has a population of approximately 4 million as per the last Census of 2009, 30 percent (i.e. 1.2 Million) of this population live in the low income urban communities with ground coverage of approximately 22 Km2. This population has little access to water and sanitation and buys water from private street vendors at much higher prices.

The Nairobi City Water and Sewerage Company (NCWSC), the City’s water supply company, has in the past found it difficult to invest in these services because of the haphazard design of the settlements, inadequate resources within the utility and a perception that residents would be unwilling to pay for services. Residents without access to piped supplies therefore buy water from private street vendors, at much higher prices.

These challenges have led to an increase in Non-revenue water for the company over the years, in order to curb this challenge as well as provide meaningful service to this unique cluster of customers, NCWSC established the Informal Settlement Department to offer accessible, affordable and sustainable water and sanitation services to the city residents in low income urban communities. The various service models that were identified by the utility to uniquely serve the low-income areas were: water Kiosks, water meter chambers/clusters, household connections, sanitation block, network intensification as well as pre – paid meter (under pilot).

NCWSC has installed water “ATMs’’ in Nairobi’s Mathare Mashimoni area – the first of its own kind in Africa. Residents are now using machines that are similar to those for accessing cash to buy clean water, with the customers able to buy affordable water using smart cards. Residents load money onto the water smart cards at a nearby kiosks or via mobile payments, and then tap into the machine how many litres they want to buy. The real game -changer aspect of the water “ATMs” is that they are doing the following: First, the water is legal. Secondly, it is clean and safe. Thirdly it is affordable- it costs less than $0.01 per 20 litre Jerri can.

The machines are operated by local youth and women groups as an incentive to ensure that they are kept running and the system is not vandalized. The Company has installed 4 “ATMs” in Mathare Mashimoni under the pilot programme and intends to roll out 12,000 dispensers to other informal settlements within Nairobi City County. The pilot project was in partnership with Grundfos LLC.

As a utility, NCWSC has undertaken water and sanitation projects in low income urban communities across the city, leveraging heavily on technological advancements. Through strategic partnership with Water & Sanitation for the Urban Poor (WSUP), the Company has managed to install 16 Token Water dispensers since November 2015.

The prepaid Token Dispensers enables the customer to access water 24/7 at a regulated price of $0.01 cents (Ksh. 0.50 cents) per 20 litres. NCWSC through this initiative co-funded by OFID (the OPEC Fund for International Development), the UK Government’s Department for International Development (DFID) and Water for the World initiated a two-year water and sanitation project in Korogocho & Kahawa Soweto, with a cumulative population of about 50,000. The initiative extended the existing network into the settlements, using high-quality polyethylene (PE) pipes.

These interventions as well as increased budgetary allocation for water and sanitation projects by the National Government are an indicator that Nairobi, as one of the water scarce cities, shall be well on its way to improving the livelihoods and dignity of its residents living in these informal settlements.