US politicians call infrastructure a bipartisan issue, essential to the nation’s growth, health and wellbeing. Of course, talk is cheap. The American Society of Civil Engineers has long given US water infrastructure a grade “D” for its 100-year old waterworks, which are still awaiting the US$1 trillion needed to fix them.

But who pays? What would they change? Where do they start? To grade candidates on their plans to prioritise, regulate and finance the nation’s water infrastructure needs, let’s see where Republican and Democratic leaders diverge (and converge) on these critical issues.

World Water Day made a big splash in the White House in 2016, as a water summit drove private sector pledges to invest US$4 billion into critical water infrastructure upgrades, such as pipes, dams and canals. 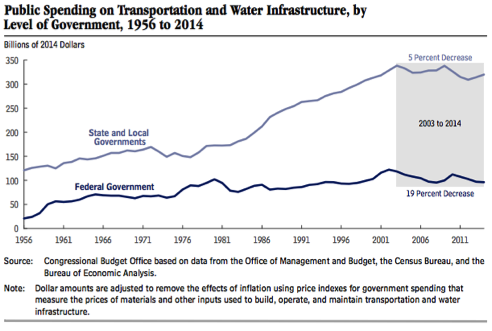 Bernie Sanders and Hillary Clinton both frame infrastructure spending as an investment in America’s economic future–one that will create lots of jobs and maintain its superpower status. Both justify federal debt spending on water infrastructure as a way to pave future growth. To ensure safe drinking water and clean water, expect more party support for the State Revolving Funds (SRFs), the mechanism through which the federal government pays for water infrastructure.

Beyond that, Hillary Clinton’s US$275 billion Infrastructure Plan is more specific, if more modest, than Sanders’ US$1 trillion Rebuild America Act on exactly how the future of water infrastructure might be financed. Sanders would finance infrastructure with revenue generated through tax reforms such as closing loopholes that enable corporations to park profits overseas, and financial transaction taxes–but some question the political realism of his plans.

Clinton has been pragmatic in her approach, keen to “harness more private sector potential and innovation”. Some of her proposals are: to reinstate the Build America Bonds (taxable municipal bonds with special tax credits and federal subsidies for the bond issuer or the bondholder); to establish a national infrastructure bank that would “allocate US$25 billion over five years to an independent, government-owned infrastructure bank with a bipartisan board of highly qualified directors”; and to support existing initiatives such as the Water Infrastructure Finance and Innovation Act.

On regulation, both Democratic candidates are likely to maintain the existing labour and environmental safeguards (in stark contrast to their Republican counterparts, as below). They would also be likely to support regulatory innovation, such as decoupling revenues from water consumption to promote conservation and other experiments with pricing mechanisms.

Building on last December’s climate change conference, US leadership and innovation on the design, finance, and construction of climate resilient water infrastructure would no doubt promote international cooperation and solidarity.

The emerging Democratic platform has prioritised water and energy conservation. Clinton wants water infrastructure needs to be more sustainable and energy efficient; Sanders wants to adopt new climate-neutral energy policies. If the federal government takes on an active role in project selection, say through a national infrastructure bank, environmental and social requirements would be stringent.

Establishment Republicans tend to resist boosting infrastructure investment, instead favouring tax cuts. Yet this is a year for wild card. Party leaders are both outsiders. And since the Flint crisis, we have seen instances of bipartisan support for water infrastructure bills, and joint concern for the safety of residential drinking water. That said, the role of regulation and the question of financing leads to some important divergence (and again, some surprising convergence).

Presidential candidates Donald Trump and Ted Cruz agree on the need to invest in the nation’s water infrastructure. “[Fixing water systems bridges, grids etc.] is going to be an expensive investment, no question about that,” said Trump. “But in the long run it will more than pay for itself.” But both dismiss deficit-financing to pay for it as fiscally irresponsible. One consequence of a Republican win might be a reduction in State Revolving Funds for drinking water and clean water, which are capitalised with federal appropriations. More generally it would reflect a continuation of the trend in decreased federal spending on water infrastructure.

So if Republicans want to capitalise infrastructure projects, where will the money come from? Some argue for diverting funds from other programmes: allocating money to infrastructure represents a golden opportunity for Republicans to extort draconian cuts from other social, regulatory or other non-defense spending. Others say the private sector can take this on: Republican candidates would like to see water utilities privately financed and operated under public private partnerships. Still others propose devolving authority to local government: less federal involvement means more power to states and municipalities. Most realistically, Republicans will combine all three.

Despite bemoaning America’s “crumbling infrastructure,” Trump stands against the idea of a public-private infrastructure bank, given the extent of federal involvement. But like Clinton he would continue support for the Water Infrastructure and Innovation Act (low-interest financing for infrastructure) in large part because of the market discipline it implies. Another item of convergence is private activity bonds, which are issued by state and local governments tax-free to private corporations and investors. Indeed both Obama and Trump support the motion to remove the existing volume limits faced by states.

All Republicans chafe at environmental regulation. Trump wants to scale down the scope of the Environment Protection Agency (EPA), while Cruz states that the EPA is populated by “zealots who are trying to shut down development and the energy sector”.

If Republicans dismantle federal oversight and planning, will the centre hold? Extreme floods and droughts transcend county or state borders, but a balkanised 53,000 utilities can’t respond. Many cite a bipartisan need for consolidation across the country, linked to national standards and coordination that can harmonise the nation’s water security strategy.

Of course, leading the US towards federal and global cooperation through elevated standards of smart, responsive water infrastructure makes sense only if you believe temperatures are rising, snowpack is melting, storms are escalating and water tables are falling. For all their differences, Trump and Cruz readily agree that threats from climate don’t matter, or even exist.