The Source
Brought to you by HIGRA 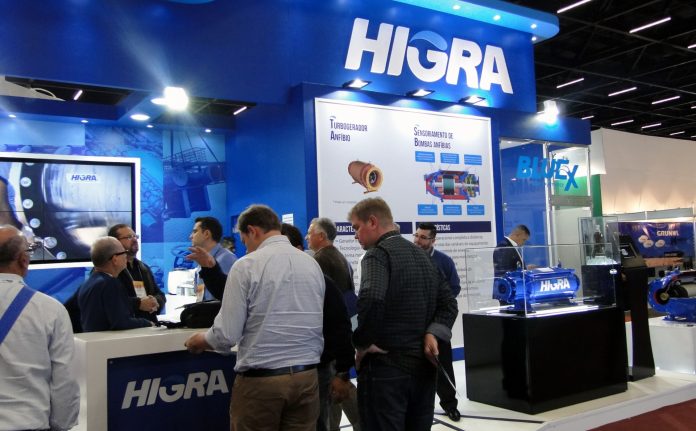 When it comes to the reduced water reservoirs and compromised springs, the water harvesting is many times presented as a villain, even though it has been taking a more important role for irrigation, industrial and water supply purposes.

Besides using high volumes of water, pumping stations are also target for critics due to need of being located near to riverbanks, creeks, barrages or dams, requiring landfill, deforestation, construction of canals and even deviations in the course of the rivers, in order to meet the technical requirements to install the existing conventional pumps.

Ever since 2001 the amphibious pumping concept has been applied to the water, industry, irrigation and mining markets, offering high hydropower efficiency associated to strength and versatility to install and operate.

Using the centrifugal pumping concept with closed or semi-open impellers with radial, mixed or axial flow, the amphibious pump has been developed with the ability to operate inside and out of water, which means it works totally or partially submersed or totally out of water, with negative or positive suction pressures.

The amphibious pump is a monoblock equipment where motor and pump are a single body with no need for couplings between the parts. For being an equipment with inflow and outflow axially aligned and equipped with connection flanges, the amphibious concept multiplies flow rates or pressures when installed in parallel or series modulation, allowing one pump to be installed directly after another, when necessary.

The amphibious characteristic is a result of the pump design, where the water flux that comes in through the suction frame goes throughout the centrifugal pumping system that supplies energy to the fluid and is conducted towards the outlet frame through an annular chamber existing between the pump external frame and the electric motor, which is inside the pumping flux.

As previously mentioned, the amphibious pumps operate with high efficiency electric motors independently of the external scenario, since they work under forced cooling regimen all the time.

Besides that, the whole pumping system is designed using state-of-the-art software of computational simulation through finite volumes for turbo machines (CFD – Computational Fluid Dynamics). The association of high technology and a qualified engineering team results impellers and diffusers with high performance, eliminating losses with energy conversion or cavitation issues.

One of the main advantages of the amphibious concept is the versatility it offers to engineers and planners when designing pumping systems. For being monoblock and having hydrodynamic bearings the amphibious pump offers a wide range of installations and uses, fitting the application place, not the other way around, and reducing the costs with execution and infrastructure drastically. Amphibious pumps do not demand shelters: simple wooden supports, rails or even the piping are enough to support the pump, which has a very low transmission of sound from inside the pump to the ambient, reaching figures not over 60dB. The whole infrastructure is reduced, making the starting process shorter.

The amphibious pumps might be installed in horizontal, vertical or inclined positions, totally or partially submersed or out of water, in different ways: Totally submersed over rails; Partially submersed held by the discharge flange; With positive pressure outdoor; With negative suction; As booster connected to the pipeline; Modulated in series with a submersed unit and another one out of water; and Under or over floating systems.

The amphibious pump global performance is one the highest in the market since joins high hydraulic efficiency, generating significant energy saving to the end user.