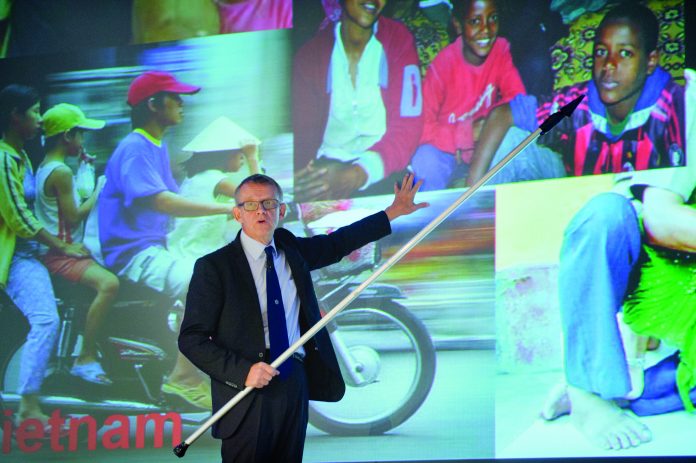 Between his birth and death in Uppsala, Sweden, the globally electrifying scholar proved statistics are anything but dry.

If he didn’t like a word, he corrected it. Live, on stage, as everyone watched transfixed.

Thousands of water professionals showed up to the IWA World Water Congress in Lisbon 2014 to hear Hans Rosling’s opening keynote, entitled: Water as the driving force for development and health benefits.

But, no. Water is “too narrow,” he decided, given his medical background, so it (poof!) became WASH. The the felt “too megalomaniac” (zap!) while development and health seemed “too vague” so let’s “go for the big thing” and (presto!) it was now “WASH as a  driving force for ending extreme poverty.”

That hands-on, playful, dazzling visual approach– reframe the discussion, repackage the data, reposition the perspective, reveal the more accurate truth–ran through everything Rosling did. It pulled you in.

His open-access Gapminder (inspired by the London subway “mind the gap,” and to bridge divides) tool turned entire countries into dynamic, living, breathing,moving, colourful blobs of various sizes and shapes. As his voice quickened, the blobs fell or rose along the x/y axis, debunking popular wisdom about the world’s bottom billions in ways few people students, experts, or lay audiences–had anticipated and still found hard to believe, even confronted with hard evidence.

Population growth is…slowing? Extreme poverty is… plunging? The average birthrate of Bangladeshi woman is… only 2.3 children?

Minute by minute, Rosling revealed these inconvenient truths of a different sort. His stories ran against the standard “doom and gloom” narrative of the UN and NGOs. Life for the urban and rural poor, in other words, was improving, and even with this recent progress, “globalisation has barely even begun.”

Yet he was the opposite of laissez-faire, those who shrug that systems fix themselves and wealth trickles down on its own. He knew climate change to be real, and increasingly risky. Power is imbalanced. The disenfranchised deserve support and buffers. No human should suffer from preventable, waterborne disease. In Lisbon, he argued “water and sanitation are used and indeed important throughout the economic spectrum.” Rather, he leveraged statistics in his presentations as a corrective, to argue for different channels, higher priorities, and better targets for aid, trade, resources and development.

Water professionals know his challenge too well. As realists we grasp the grim numbers, the billions without, the ambitious SDGs, the expensive backlog of deferred maintenance. As optimists we also know there are innovative and affordable solutions emerging every day, ready to scale. How to mind the gap?

Given urban thirst, it feels tempting to raise our voices, become shrill, angry, alarmist, demanding, or frustrated. We chafe at the pace of technological adoption, of river and aquifer depletion, of our sector low ranking or that something so fundamental to life, energy, food as “water” is a narrow “sector” at all.

Rather than panic, or retreat to labs, Rosling showed us a third way to speak truth to power and galvanise opinion: engage your audience. Surprise them. Make them smile. And in doing so, help them learn.

Yet Rosling’s expansive vision shatters all that. He immortalised in person, in technology and on the internet, how interconnected we are, and he made truth contagious, if framed in the right way.

His scholarly work, like his popular presentations, was deeply rooted in science. He demanded “respect for demographers” for making accurate 40 year projections. He put faith in hard figures. But as a showman or “edutainer” he never took himself too seriously. He posed for photos neck deep in water, swallowed swords on stage, jokingly forced Europeans to merge with Turkey and Russia in his models– and in doing so showed water professionals how intellectual rigour can be far more engaging, fun and effective when shaken like a mixed cocktail with a powerful shot of energetic, self-effacing humor.