The Source
Brought to you by Amiblu 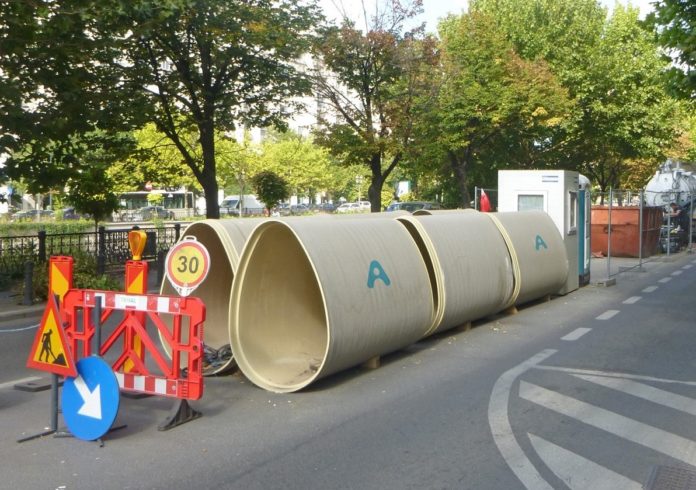 Bucharest’s sewer system is between 25 and 100 years old, and a decision was made to renovate it step by step to increase its efficiency and reliability. After thorough technical considerations, Amiblu was contracted to supply 5200m of egg-shaped non-circular (NC) GRP pipe profiles in a range of cross-sections. Within almost two years, six out of seven sections were successfully relined with Amiblu NC Line pipes, each with profiles of a different width (780-1700 mm), height (1200-2550 mm), and wall thickness (14-24 mm). The seventh and last part is currently being supplied and will be installed by the end of 2019.

Another 63 m of circular Hobas GRP sewer pipes were also installed via relining. Once finished, the rehabilitation project will improve environmental protection as well as the safety of Bucharest’s water and sewer system and considerably reduce its overall operating costs.

The sewer rehabilitation involves various stages and locations. In April 2016, TAHAL and Bucharest City signed a contract to implement a range of works including a shotcrete rehabilitation section, sealing joints, installation of a new collector by microtunnelling, and nearly 5km of rehabilitation by GRP relining. The contract to supply Amiblu GRP was signed in November 2016 and the first order for half of the project was supplied in December 2017, the second in September 2018, and a third and fourth order followed.

The Amiblu experts performed several tests and calculations and created reports and procedures to customize the non-circular profiles to the existing channel’s varying diameters and conditions. The pipes’ wall thickness, for example, was defined and calculated according to the project load using the 3R2014 and ISO 16611 method. The NC product offers an equal or greater vertical deformation resistance compared to an SN 10,000 circular pipe of the same height.

The pipes were delivered to the sites in the heart of Bucharest on smaller trucks equipped with cranes to optimally adapt to the narrow streets and heavy traffic as well as the restrictions on unloading and storing the pipes on site.

Both the NC profiles and circular pipes were lowered into the old brick sewer through a shaft with a crane or forklift and then either moved horizontally by a trolley or pulled with a steel rope by a crane from the opposite side. The single pipe segments of the same dimension were joined through bell-and-spigot joints with elastomeric gaskets, with staff helping to perfectly adjust the position of the profiles. Differently shaped sections were connected via manholes, after centering and fixing the pipes using spacers.

Depending on the weight, position, and dimension of the pipes, the necessary connection force was provided either by forklift, hoist, or manual tools. The new pipes were then fixed inside the old channel with an innovative method of welding bolts and nuts into each pipe, on a minimum of four and a maximum of eight points, which strongly fixes the old and new pipes. Nearly all grouting was undertaken at night to avoid disrupting traffic.

There is still much work to be done and Amiblu has been involved from a very early stage. Bucharest is currently preparing documentation to access EU funds through the POIM programme (an operational programme for large infrastructure). Another project is currently being prepared, which involves rehabilitation with both circular and NC pipes for the sewer network in three districts: Cotroceni, Regina Maria, and Tineretului.