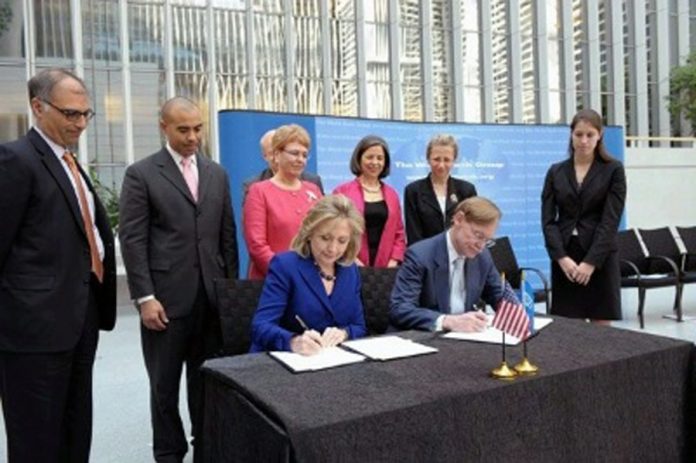 Water and development professionals may wonder What U.S. foreign assistance can we expect from the next White House occupant? Anecdotal and corroborated evidence suggest how the candidates might respond.

A Democrat win would build on Obama Administration development programs, such as “Feed the Future”, “Power Africa”, and its commitments to aid transparency. A strong likelihood of continuity is partly locked in by legislation that links long-term strategies and resources, it’s also due to the fact that Hillary Clinton created many of the initiatives while Secretary of State.

This may reassure the beneficiaries of development assistance from USAID or other federal agencies. These include current water-related missions, programs and partnerships such as the Nexus Dialogue on Water Infrastructure, the African Ministers’ Council on Water, or the Clinton-spurred Lower Mekong Initiative on transboundary river basin planning.

Clinton is also likely to elevate water management as a foreign policy priority. One World Water Day, as Secretary of State, she memorably affirmed: “It’s not every day you find an issue where effective diplomacy and development will allow you to save millions of lives, feed the hungry, empower women, advance our national security interests, protect the environment, and demonstrate to billions of people that the United States cares, cares about you and your welfare. Water is that issue.”

One year later, on behalf of seventeen agencies, Clinton signed an MoU with the World Bank, to expand joint efforts to create a more water-secure future. Since then, her family’s foundation has advanced the Water Scarcity Call to Action. Her legacy is literally written on the wall inside the USAID headquarters, which enshrine her “invaluable contribution to worldwide development.”

But those hoping to make big waves through radical ideas and dramatic projects might be disappointed. Some skeptics see in Clinton a leader who supports incremental advances in the programs she inherits, without introducing bold new ideas.

By contrast, her opponent seems more than intent on ‘shaking things up.’

He ridicules multilateral cooperation as self-defeating globalism. He promises to withdraw the U.S. from the Paris climate change agreement. He vows to build a 2,200-kilometer-long wall across the U.S./Mexican border. But he has not addressed how to reconcile this wall with the transboundary rivers the two countries share, since international treaties prevent construction in the river’s flood plains.

Despite stark differences in their credentials, both Trump and Clinton agree that international development can advance U.S. national security and economic interests. Both also seek to focus on evaluating the performance of development projects. And so far neither has proposed to ratify the UN’s Convention on the Law of the Non-Navigational Uses of International Watercourses, which would provide a strong basis for international cooperation, negotiation and U.S. leadership on water.