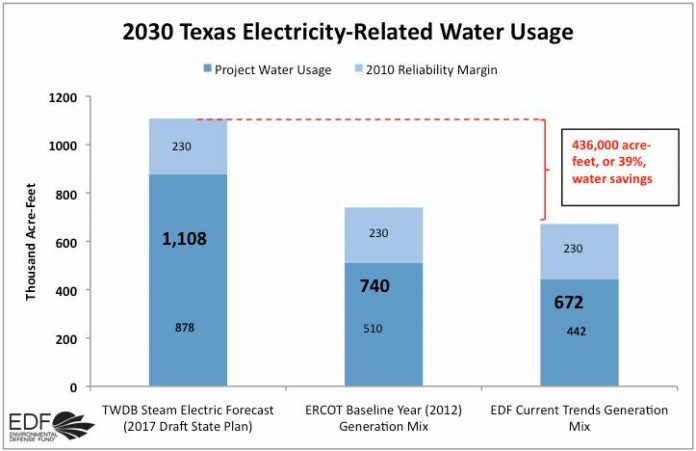 Recent storms, droughts, and rising seas focus our thoughts on ‘resilience’. That buzzword boils down to building systems that can withstand and quickly recover from the effects of climate change. In the water sector, resilience means ensuring sufficient supply and managing demand.

My home state exemplifies the highs and lows and extremes that some regions of the world are now facing. Within the last five years, Texas has gone from the throes of a devastating drought to historic flooding.

In this climate of feast or famine, both water supplies and conservation efforts have a strong tie to energy choices. Indeed, Texas’ evolving water reality has grown more complex due to the state’s energy mix, which is becoming increasingly efficient and clean.

Yet this trend has revealed an encouraging development that can inform long-term resilience plans for Texas and the world: a cleaner electric grid requires less water.

If our resource utilities take a more comprehensive view–seeing energy in relation to water–we will better adapt populations to the volatile extremes of a changing climate.

This view of inextricably linked resources is known as the energy-water nexus. The nexus highlights the reality that conventional energy resources, such as coal and nuclear power plants, require large amounts of water to produce electricity, while most of the water we use requires a considerable amount of energy to treat and transport it. Waste in one depletes the other.

But, as we are discovering, the converse also holds true.

Texas’ recent State Water Plan forecasts that from 2010 to 2030, annual demand for steam-electric water–water needed for fossil fuel-fired power generation–will increase more than 50 percent. That number is based on the energy resources Texas deployed in 2010, as well as the state’s forecasted economic and population growth.

Yet this estimate does not consider the state’s evolving energy reality: Texas has ramped-up clean energy in the past few years, and this trend will likely continue. That evolution matters, because energy efficiency, solar PV, and wind use virtually no water to create electricity, compared with thirsty coal, nuclear and natural gas. In short, the water intensity of the state’s generation mix is decreasing.

By how much? Well, based on energy data from Texas’ main grid operator, the water agency’s forecast for Texas’ power-related water needs in 2030 exceeds the future reality by nearly 40 percent. That’s good news, in theory, but such gross overestimation of the power sector’s future water needs means the state lacks a comprehensive, clear picture of its own demand.

And it could push even further. A robust nexus approach in the State Water Plan could enable both energy and water savings statewide. California’s Energy Commission found that water conservation could save as much energy as efficiency programmes at investor-owned electric utilities–but at half the cost. Coordination between the two sectors could also save water directly and indirectly through energy efficiency.

Texas is only a microcosm of challenges arising around the globe. Many countries and regions struggle with competing demands for energy and water. Failure to take both into account at once skips a golden opportunity to improve water supply and demand projections, while also advancing clean energy and climate goals.

Right now, more than 30 million people in eastern and southern Africa are suffering the worst drought in decades. Not only does the lack of water impair local food production (another nexus). It also curtails electricity access or reliability, as many rely heavily on fossil fuel or hydropower.

South Africa is in the throes of the worst drought in a century, made worse by thirsty energy production. The country’s electric grid depends 72 percent on coal, followed by nuclear and hydropower. Yet renewable energy is growing fast in South Africa, and the mobile nature of some technologies–like solar panels– further enhances access to electricity in more remote areas. The country has committed itself to expand renewables throughout its future energy mix. The original goal may have been to cut carbon emissions, but a happy parallel consequence is to cut electricity’s thirst. That decrease must be accounted for in water planning.

The South African example is, like that in Texas, globally relevant for every country that signed the Paris climate agreement and adopted the Sustainable Development Goals (SDGs). Among the SDGs are commitments to address climate, energy, water, and food.

Official projections should use the best available data and methods. That way, wild swings in weather (which we can’t control) don’t translate to wild swings in water supplies (which we can). Incorporating a more comprehensive energy-water understanding into policy can help guarantee reliable, plentiful water for communities and industries for years to come.

Through a new lens – one that considers water in energy plans and vice versa – our governments can better meet the heavy commitments they have made: both to international accords, and to their own citizens.

But there’s more to it than that. By reducing their carbon footprint, they simultaneously reduce their water footprint. In that respect the nexus becomes the key to unlock resilience. 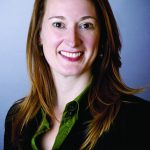 *Kate Zerrenner is the manager of energy-water initiatives under the climate and energy programme at the Environmental Defense Fund.