The Source
Brought to you by Aquatech Amsterdam 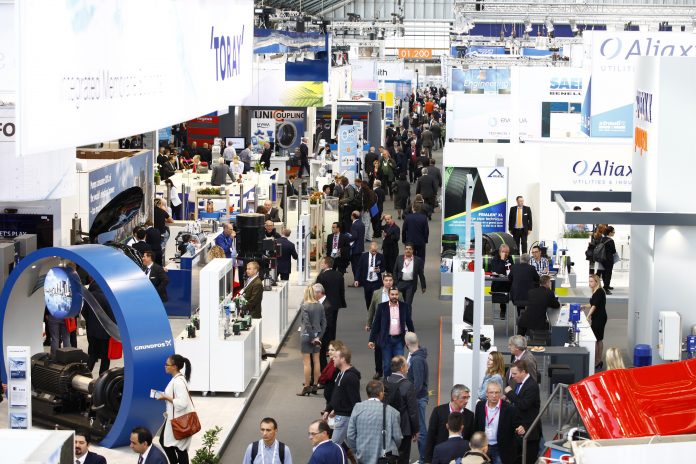 At the beginning of May, Aquatech Amsterdam announced that the event was a complete sell-out. Setting a new record, the show has attracted over 900 exhibitors from a waiting list created 6 months before, and has even creatively looked at options to add more square metres to the already fully filled halls.

The success is primarily defined by the international reputation the show has acquired since its first edition in 1964. It is the oldest and largest trade show on water technology and companies from around the world are eager to get on board.

New at Aquatech
As always the content at Aquatech is based on new developments and the advice of the exhibition committee, captains of industry and experts in their field. “Next to the familiar country pavilions, Industrial User Experience, Pumps & Process Plaza, we have newly added the Desalination Pavilion and Smart Water Networks Pavilion,” says Marieke Leenhouts, Exhibition Director for Aquatech Amsterdam. “There will also be a Circular Economy Lounge and the InnovationLAB will have an “Experiences-area” with prototypes and demos, and connect to the new Innovation Avenue. Underlining the importance of innovations crucial to the future of the water market.”

An international audience
With over 70 percent of visitors flying and driving in from other countries, Aquatech will have a truly global flavour. The majority originate from Europe but interest from Asia, the United States and the Middle East is rising rapidly. Visiting the RAI is very easy when flying in. Schiphol international Airport is just 15 minutes away by train from the venue and the Aquatech organisers have arranged a free first class train ticket from this airport, to be ordered in the free visitor registration module.

Guided tours and matchmaking
For the first time Aquatech is organising guided tours and a matchmaking service. Visitors with a specific interest in Circular Economy, Smart Cities, Urban Resilience and/or Innovation can join guided tours of the show tailored to these interests. Another new additional service is matchmaking. Visitors can pre-arrange networking and business appointments with exhibitors, as well as other visitors and speakers, based on interests and profile.

For the fourth time Aquatech is part of the Amsterdam International Water Week (AIWW), a diverse platform for water professionals around the world including a conference, a young professionals programme, social events and–new this year–Floodex Europe Launch Event, which covers water level management and flood control. This subject was previously covered in the Storm Water Pavilion at Aquatech but with current climate developments demanded more attention and is now covered in a compact programme, with four elements, a Show Tour on Aquatech Amsterdam , a comprehensive knowledge programme, a networking gathering and a side bus tour visit.

Everything is gearing up for a spectacular week starting on 30 October, with the opening at the end of the day, and the start of Aquatech Amsterdam and the Floodex Europe Launch Event on the 31st.