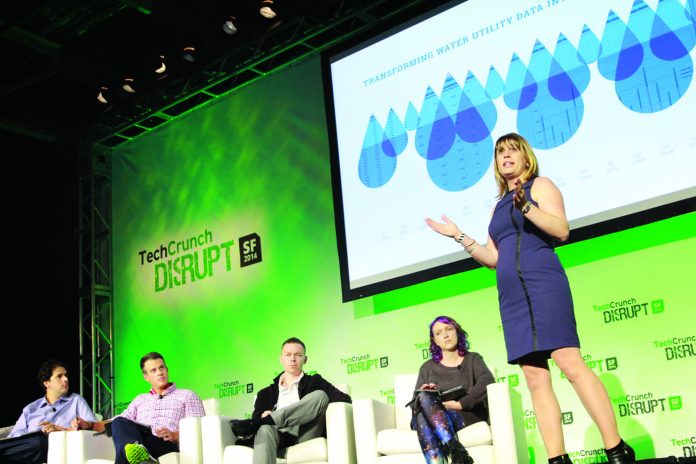 The story of Valor Water exemplifies how a start-up can go from lab to launch to Xylem subsidiary but it takes courage as well as technology to get noticed. By James Workman

Just over a decade ago, Christine Boyle was one of four doctoral students at a University of North Carolina (UNC) think-tank, mining billions of data records provided by a consortium of utilities.

The team’s mandate was to pore over and sift through the data, seeking out new signals that could help local water districts improve service delivery. At the nexus of conservation, behaviour, policy and economics, the team developed ‘Big Data’ software that revealed hidden revenue – by identifying leaks and highlighting peaks – and which set out patterns by which utilities could save water without eroding income.

The work was compelling but after publishing their findings, the four came to an inflection point.

Three of the partners are now happily ensconced at a university, utility, and in public service but inspired by her salesman father, Boyle had caught “the entrepreneurial bug”.

Believing that utilities had financial drivers to squeeze savings and reduce losses, which had largely been ignored by the water innovation market, she licensed the software in 2013 from UNC, headed to California and registered a business in San Francisco called Valor Water Analytics.

Five years later, on 28 February 2018, her small, nimble firm was acquired for an undisclosed sum by Xylem (NYSE: XYL), a US$13 billion water technology company with utility and commercial clients in 150 countries.

Boyle’s email inbox is now crammed with water entrepreneurs begging for advice. And while there’s no one answer she can offer, Valor’s journey offers a few lessons for why so many water innovations take a decade or more to become commercially viable, yet a few leapfrog in half that time. [Full disclosure: years before becoming editor of The Source, I hired Valor to crunch some numbers for a pet project].

So what happened to transform a lab idea into something profitably contagious?

First, innovation is about far more than sensors, widgets and digits. Many who research and develop incredible ideas have neither interest nor aptitude in persuading others to buy them. True, the quest for tenure is notoriously competitive; universities offer a marketplace of ideas; and peer review can be ruthless. Still, the lab is, by design, set apart and insulated from society. “The skillset to start a business versus the skillset for those who gravitate to academia, are two very different things,” says Boyle.

“It’s almost a matter of DNA,” she adds, having cut her teeth in sales before getting her PhD. “If you’ve got some world-changing technology, find a co-founder who can be your front person and isn’t afraid to sell and knock on doors.”

Scott Bryan, head of the accelerator Imagine H2O (see box), agrees. “Success in the water sector is not purely a function of technology,” he says. “An innovative business model is essential. There’s simply not a path forward to technologies looking for problems. The commericialisation process has to be customer focused.”

Second, water industry clients are complicated. So deal with it. It’s one things to complain how utilities are risk-averse, and another to get past that frustration. What’s important is understanding why they are what they are, putting real and perceived risk into the appropriate context: will customers get sick, complain, pay more, suffer interruptions, withhold payment? Boyle has spoken out about the need for the sector to move beyond its  “culture of ‘no’” and appreciate how there are also serious risks of inaction. It’s also difficult to find another market where encouraging efficiency gets punished with declining sales. Boyle was fortunate to time her product launch as California entered its worst historic drought. Yet as water districts were told to reduce demand by a quarter, and customers saved water, utilities lost revenue. Valor managed to turn this pain threshold into a selling point, demonstrating how they could meet targets without sacrificing income.

“Valor adhered to a highly focused market strategy while successfully partnering with reference customers to validate the technology,” says ImagineH2O’s Bryan. “Instead of becoming frustrated with a risk-averse customer base, she aligned with customers and proactively helped them acknowledge and manage risk. This enabled customers to see the potential value in using the Valor product.”

Third, you need to get out of the lab and leave the office. Having spent several years refining software in a think tank, Boyle was eager to test it in the rigours of the real world. Gregarious, outspoken, and confident, she was comfortable making dozens of cold calls a day, entering competitions and reaching out to accelerators – like Y Combinator and Imagine H2O – and to strangers, trying to enlist potential investors.

Many calls went unanswered, with messages unreturned but persistent outreach gave her a financial footing. She eventually closed a US$1.6 million seed round, led by Shore Ventures II, which came to include the Urban Innovation Fund, 500 Startups, Synygy, Stout Street Capital, Matadero Capital, and Apsara Capital.

Boyle’s own “culture of yes” has meant attending any conference as a business opportunity, amassing frequent flyer miles in the US and abroad. She addressed the 2017 IWA Specialist Group on Water Efficiency in Bath, England, and during our interview was preparing for the IWA Water Loss Conference in Cape Town.

On the road, some of the most promising meetings happen by accident. On 25 March 2016, in New York, Boyle spoke on a Colombia University panel “America’s water: innovation at work” focused on the linkages between urban and regional water systems. Seated on her left, Boyle’s fellow panelist happened to be the global leader of the team responsible for corporate strategy, mergers and acquisitions, partnerships and business development for Xylem. He appeared impressed enough with what she said to invite her out the next morning to breakfast. Boyle seized her opportunity “They began taking our temperature, asking ‘How’s business, have you thought about selling?’ and so of course our answer was ‘Business is great and we’re not for sale’.” But the door had opened, she said, and the two stayed in touch as the wooing continued over nearly two years until 2018 “brought both our parties to the negotiating table to hammer out a deal”.

If there’s a fourth lesson, it is to build a culture of trust through perseverance.

The two companies realised they could grow into one another. Valor was preparing for a Series A round of investment. Yet Boyle said she and her team discovered a solid cultural connection with the energy and outlook of those at Xylem, who in turn sought to create a new division that would focus on revenue loss detection. The big corporate could bring Valor’s innovative product a lot faster to a lot more meters.

The same patience applies to early adapters – clients, employees, partners, and investors. “Our customers are also enthusiastic,” Boyle said in an interview in Medium, “as they know Valor will have more resources to support and expand its technology platform. For the early reference customers, there’s also a sense of validation knowing that they picked a winning partner at a very early stage.”

Startups in the water sector can rarely compete financially with Google for skilled hires — code writers, graphic designers and tech engineers. Nor can potential return on investment often compete with unicorns like Uber or Facebook. Money is undeniably important, perhaps paramount.

Yet labour and capital are also and sometimes equally animated by the desire to do something meaningful for the planet. “Valor got its name from the military use of the word,” says Boyle as she prepares for a conference taking place where water loss threatens Cape Town’s millions. “For people with the bravery and courage to solve the world’s water crisis.”

And that, perhaps, is the real ‘secret sauce’ behind water sector innovation: the courage to never say No.